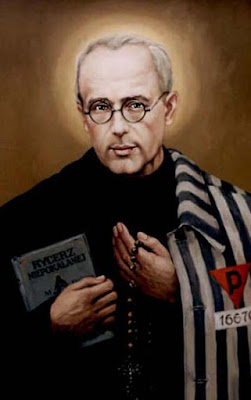 Pope Benedict reminded us recently that the death of Kolbe was a witness of the love which "defeats the darkness of egoism and hatred." The Holy Father recalled words attributed Saint Maximilian Kolbe: "Hatred is not a creative force: only love is." On August 14, 1941, the saint died in place of Franciszek Gajowniczek.
When still a young child in Poland, St. Maximilian Kolbe (8 January 1894 - 14 August 1941) was known to be rather boisterous, so much so that his mother asked him once in exasperation, "What is going to become of you?" Her question made him think, and he asked Our Lady the same question: "I felt very sad and went to the Blessed Virgin and asked Her what would become of me. After that, I asked Her again in church. Then the Blessed Virgin appeared to me, holding two crowns. One was white [representing purity], and the other red. [representing martyrdom]." Our lady then asked him which he would choose. "I choose them both."
St. Maximilian grew up, became a priest, and founded the confraternity (a fraternity that includes laymen) known as the Militia Immaculata (also known as "The Militia of the Immaculata"), a movement whose purpose is "to convert sinners, heretics, and especially Masons, and to sanctify all under the patronage and through the intercession of the Immaculate Virgin Mary." To this end, he encouraged conscecration to Mary and, because he was so inspired by the story of the converison of the Jew Alphonse Ratisbonne, the wearing of the Miraculous Medal.
Though very sick with tuberculosis, he published a magazine, Knights of the Immaculate, to fight religious apathy and founded monasteries in Poland and Japan. When the Nazis invaded Poland, he was arrested and sent to Auschwitz. There, in July 1941, a prisoner escaped, and in retribution for such, the Nazis' method was to kill ten of the remaining prisoners. One of these apparently doomed prisoners was a married man with children. St. Maximilian asked the Nazis if he might die in that man's place, and his wish was granted. He was starved and dehydrated for three weeks -- weeks spent spiritually tending to and singing hymns with the nine prisoners with him -- and then given a lethal injection of carbolic acid on 14 August.

Heavenly Father , You filled Your priest and martyr, Saint Maximilian Kolbe, with zeal for souls and love for his neighbor. Through the prayer of this devoted servant of Mary Immaculate, grant that in our efforts to serve others for Your glory we too may become like Christ Your Son, who loved his own in the world even to the end, and now lives and reigns with you and the Holy Spirit, one God, for ever and ever. Amen
Posted by Cradle Trady at Friday, August 14, 2009