Blessed Feast of Saint John Vianney - parish priest of Ars, is certainly one of the noblest figures among the saints of the 19th century

Today is the feast day of the Curé of Ars, confessor, intercessor for the Clergy’s sanctification and model for those entrusted with the care of souls. He lived in the 19th century (1786-1859).
There is always a word to say about St. John Baptist Vianney because he was one of the greatest saints of the 19th century. His life presents so many different facets that one always can take new lessons from it. In the first decades of the 19th century, he was a poor seminarian.The site where he entered Ars. He told the boy: "You have showed me the way to Ars. I will show you the way to Heaven"The pulpit in the Church of Ars where the Cure delivered his famous sermons .
The Chapel of St. Philomena, to whom the Saint gave all the credit for the miracles he worked . The Bishop sent this dull priest to a tiny village in the south of France, the village of Ars. There he began his sacerdotal life, which would permeate all of Europe with its light, and, from there, spread throughout the world. He was canonized a saint by Pius XI in 1925 and proclaimed patron of parish priests.
What was it that distinguished this Saint? Even though he didn’t have any natural qualities to make him an exceptional priest, he became a magnificent priest, an extraordinary apostle, a confessor with rare discernment, and a preacher who exercised a profound influence over souls .
He was also a martyr of the confessionary. He used to spend hours and hours there hearing confessions and giving counsels.
Fighting with evil : This extraordinary Saint spent all his time in the church: at the pulpit, confessionary or altar. At night when he returned to his house, one might think he would at least get a deserved rest. But no, a new fight started, this time against the devil. For decades he fought a nightly battle with the devil – whom he called Grapin – in which the devil physically assaulted him and tormented him with deafening noises and insulting words. On the night before a person particularly dominated by the devil would come to confess to St. John Vianney, the devil would inflict stronger torments on the Saint. Once he set fire to the Curé’s bed. In response St. John Vianney used to increase his special penances, flagellations, and prayers to win the graces for his words to effect the needed conversions.
Performing miracles :Divine Providence, in order to further increase his apostolate, gave him the gift of the miracles. In fact he worked many miracles. But he did not attribute them to himself. In his church he built a shrine to St. Philomena, a virgin martyr that Paul VI removed from the list of the saints. St. John Vianney did not think the same way, and attributed all his miracles to her.
Saint John Vianney died peacefully on August 4, 1859. When his body was exhumed due to impending beatification, it was found perfectly preserved. Later the Saint’s heart was removed and remains a venerated relic. The Saint's body is laid in the Chapel of the Reliquary in a new basilica which is attached to the original Parish of Ars Church in Ars, France. A special chapel was erected to receive the miraculously incorrupt Heart of the Curé of Ars. 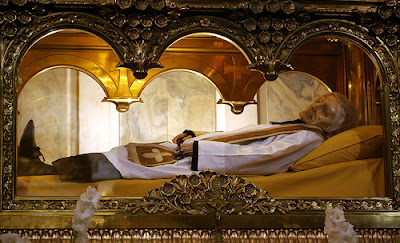 Several miracles have been attributed to Saint John Vianney ( read about here) .
Let us pray to St. John Baptist Vianney and ask him to heal the Catholic clergy from the negative influence of Vatican 2 . And let us ask him to give us the necessary discernment and strength of will to be free of any temptations of modern world , to fight against any evil manifestations and increase of faith .