Memorial of the Martyrdom of Saint John the Baptist 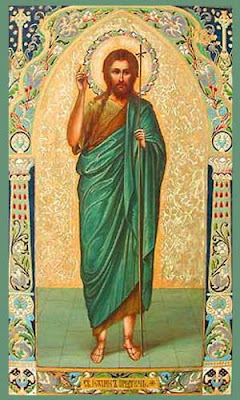 Christians unite in reverence and love for this Prophet, Forerunner and Saint whose life is an incomparable example of both humility and courage . Let us faithfully pray :
O God, You raised up St. John the Baptist to prepare a perfect people for Christ. Fill Your people with the joy of possessing His grace, and direct the minds of all the faithful in the way of Peace and Salvation.
Grant that as St. John was martyred for Truth and Justice, so we may energetically profess our Faith in You, and lead others to the Way, the Truth, and Eternal Life. Amen.

Today is the Memorial of the Martyrdom of Saint John the Baptist, called the Precursor or Forerunner of the Lord, in the three Gospels of Matthew, Mark, and Luke, as well as in the Book of John. Luke tells us of the birth of John the Baptist in a town of Judaea, about six months before the birth of the Saviour.
Church considers Saint John the Baptist as one of the greatest among the Saints and Martyrs. The Raccolta of 1957, the Manual of Indulgences is arranged in hierarchical order: After the Holy Trinity can be found indulgenced devotions to the Blessed Virgin; next the Angels, and then the section on the Saints, which begins with St. John the Baptist.

The Raccolta follows the teaching of the Church even in its ordering of the devotions, a kind of little catechism we might say.
The Roman Missal also says that after the Feasts of Our Lord, Our Lady, and the Angels the Feasts of most importance are that of St. John the Baptist .
About the Martyrdom of John the Baptist :
In addition to the feast of the nativity of St. John the Baptist (June 24), the Church, since the fourth century, commemorates the martyrdom of Christ's precursor.
Herodias never ceased plotting against the life of John, who was not silenced even by prison walls. His followers now became even more turbulent. To Herodias soon came the opportunity she had long sought to put an end to the life of blessed Saint John the Baptist . In Matthew xiv, Mark vi, and Luke ix, we are given parallel accounts of this infamous occasion which was to culminate in John's death. At the feast, Salome, fourteen-year-old daughter of Herodias by her lawful husband, pleased Herod and his guests so much by her dancing that Herod promised on oath to give her anything that it was in his power to give, even though it should amount to half his kingdom. Salome, acting under the direction and influence of her wicked mother, answered that she wished to have the head of John the Baptist, presented to her on a platter. Such a horrible request shocked and unnerved Herod. Still, he had given his word and was afraid to break it. So, with no legal formalities whatever, he dispatched a soldier to the prison with orders to behead the prisoner and return with it immediately .

There was great sadness among the people who had hearkened to him, and when the disciples of Jesus heard the news of John's death, they came and took the body and laid it reverently in a tomb. Our Lord and Saviour Jesus Christ , with some of His disciples, retired "to a desert place apart," to mourn.
Posted by Cradle Trady at Saturday, August 29, 2009