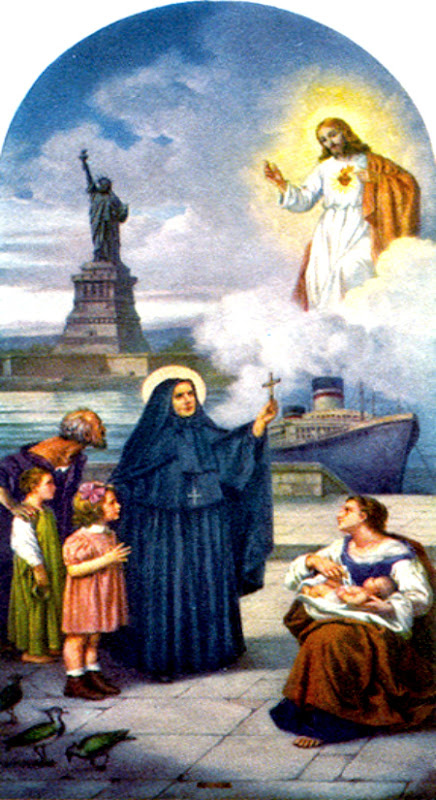 O Lord Jesus Christ, Who to win souls for Thyself didst conduct the Holy Virgin Frances Xavier, aflame with the fire of love from Thy most Sacred Heart, on her long and repeated journeys and through her didst raise up a new family within Thy Church: grant us, we beseech Thee, by her intercession, the grace to put on the virtues of that same Heart of Thine and to arrive safely at the Heavenly port, there to be happy forever. Who livest and reignest, with God the Father, in the unity of the Holy Ghost, One God, world without end. Amen.

This pioneering educator and missionary Saint Frances Xavier Cabrini, better known to all her followers as Mother Cabrini is one of our most modern saints and yet the first American citizen to be canonized a saint. She was canonized by Pope Pius XII on June 7, 1947, only 30 years after her death in Chicago, Illinois in 1917. On November 13, 1950 the Holy Father proclaimed Mother Cabrini "Patroness of Immigrants." Maria Francesca, as she was christened at baptism, was born prematurely on July 15, 1850 as the youngest of 13 children to Augustine and Stella Oldini Cabrini at Sant' Angelo Lodigiano in Italy. She had always had the inborn desire to do something special for God. Though she was on her way to becoming a school teacher, her parents both died in 1868 and she decided to become a nun. After two communities turned her down, the bishop of her diocese Msgr. Serrati asked her to take over a poorly run orphanage in Codogno, Italy which was called House of Providence. Naturally resentment arose from the original foundress Antonia Tondini and the tension-filled conflict caused the bishop of Todi to shut it down. But he realized Frances' zeal and talents and invited her to found a religious organization of nuns devoted to teaching young girls. With seven other young women, Francis remodeled an abandoned Franciscan friary which served as the mother house for the Missionary Sisters of the Sacred Heart which the bishop approved in 1880. Vocations became plentiful and soon the order had spread to Milan, Rome and other parts of Italy. Soon word reached across the sea.

Realizing the need to minister to the Italians who had immigrated to the United States, the bishop of New York Archbishop Corrigan invited Mother Cabrini to come to America to help the immigrants. She accepted and arrived at the portals of Ellis Island in 1889. For the next 27 years she would establish numerous schools, hospitals, convents and orphanages throughout the vast United States from New York to Denver despite great obstacles.

In 1907 her congregation received papal approval. Two years later she became an American citizen. America was definitely the better for it as the Church grew rapidly through the works of those inspired by this Italian saint. Mother Cabrini founded over 67 charitable organizations and houses for the Missionary Sisters of the Sacred Heart. While still alive she was able to obtain countless special favors through her prayerful intercession. Many accounts of spiritual phenomena accompanied Mother Cabrini. One such account relates to her founding a house just outside of Denver in what is today Golden, Colorado. Surveying the hilly and rocky land above Denver, the owner sold it to her dirt-cheap so-to-speak because there was no water on the land and nothing would grow there. This did not daunt the staunch saint. She took her wooden staff and trekking up the hill, poked at the earth and water gushed forth where it still flows freely today. Returning to Chicago, she fell ill and died on December 22 in the same year as the Fatima apparitions of 1917. Many who come to America's shores from all over the world invoke the intercession of Mother Cabrini today as the "Patroness of Immigrants."