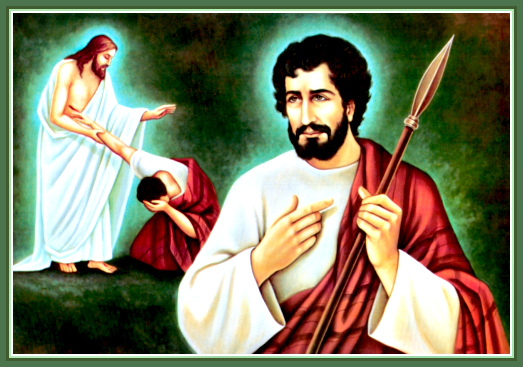 We render to Thee, O Lord, the homage due Thee, earnestly entreating that by the prayers of Thy blessed Apostle Thomas, on whose Feast we offer these sacrifices of praise, that Thou guard Thy gifts to us. Through our Lord Jesus Christ Thy Son. Who liveth and reigneth with Thee in the unity of the Holy Ghost, one God
forever and ever.Amen.

The feast of Saint Thomas was inserted in the Roman calendar in the 9th century and it was assigned to 21 December (until the 1969 when the reformist and liberal Second Vatican Council changed and assigned on July 3 ), but the true Catholics and the Remnant are celebration the Feast today ( not even a Vatican 2 invented optional memorial..)
Thomas is listed in the Synoptic gospels and in the Acts as one of the Twelve Apostles. (His name in Aramaic, Te’oma, means ‘twin’, as does Didymus in Greek) What we know of Thomas comes mostly from the New Testament, although there are many other legends about him. He is mentioned just once in each of the Synoptic gospels and always in the same context – he is listed as one of the Twelve Apostles chosen from among the disciples of Jesus. There is no other mention of him in these gospels. He is also mentioned just once in the Acts of the Apostles where he is simply listed among the Apostles who gather in the “upper room” immediately after the Ascension of Jesus.

However, he is mentioned four times in John’s gospel where something of his character appears. He comes across as somewhat aggressive and argumentative. In chapter 11, we are told that Jesus has just received word that his friend Lazarus, the brother of Mary and Martha, is seriously ill. But Jesus waits for two days before deciding to go to Bethany. The disciples are somewhat alarmed because there are people who are threatening the life of Jesus and try to dissuade him from going. But, when it is clear that Jesus has made up his mind, Thomas says to his companions, “Come, let us also go to die with him.”

Later, during the Last Supper, while Jesus speaks of leaving his disciples but that he will come back to take them to himself, he says: “Where I am going, you know the way.” It is then that Thomas indignantly blurts out, “Master, we do not know where you are going. How can we know the way?” And we can be thankful to Thomas for eliciting one of Jesus’ most beautiful and meaningful statements: “I AM the Way, the Truth and Life.”

We next meet Thomas in chapter 20 of John. Jesus is risen. He has appeared to his disciples on Easter Sunday but Thomas is not there and, when told of the meeting, refuses to believe. “Unless I see the marks of the nails in his hands and put my finger into the nail marks and put my hand into his side, I will not believe.” On the following Sunday, Jesus appears again and tells Thomas to examine his hands and put his hands in Jesus’ side. “Do not be unbelieving, but believe.” Again, the impulsive Thomas goes to the other extreme. He falls to his knees and exclaims: “My Lord and my God!” He is the only person in the Gospel to address Jesus as ‘God’. It was an expression of deep faith.

In the Gospel for today the response of Jesus to the doubt which Thomas had expressed concerning His resurrection is related, with the answer of Thomas, "My Lord and my God." St. Thomas is said to have planted the standard of the cross among the Medes, Persians, and neighboring nations. He is called the Apostle of India. He is said to have been slain for the faith at Calamina in India; and there is a legend to the effect that he was executed by the sword or by a lance.

Let us pray. O merciful God, do Thou abide with us, and, with the blessed apostle Thomas interceding for us, mercifully watch over Thy gifts made for our welfare. Through our Lord Jesus Christ, Who livest and reignest, with God the Father, in the unity of the Holy Ghost, one God ,for ever and ever. Amen.